ayjaydee Stats on the BBC website show that only 35 players under 21 were given game time in the Prem last season. No real surprise but not a huge pool to pick from. Also only 30% of all players are qualified for England (50%+ in germany) Got to have a bit of sympathy for England managers at both 21 and senior levels.

It's a bit misleading though isn't it? Especially as the stats up there aren't quite what the article on the BBC says. The 30% is actually 43% of players eligible for England, which is adimittedly still lower than Italy (46%), Germany (55%) and Spain (62%).

There are a similar number of minutes played in England and Italy by U21s qualified for their respective nahtions but it doesn't stop Italy putting together a much more cohesive team than we did.

As for only 35 players getting Premier League experience, that obviously doesn't cater for the fact that many good players like Zaha, McEachran, Chabolah, Ince and Butland all played a lot in the Championship last year which is a better standard than a lot of their opposition played at.

There is an issue with the number of players we're producing but I think the much bigger problem is the way those players were used. Pearce, as he did last time around, didn't know he best team and made all sorts of changes between games and the side just didn't look anywhere near as organised or familiar with each other as Italy or Norway, let alone the Dutch, Spanish or Germans.

ZacNaloen They beat Norway twice without conceeding in the qualifiers.

But they couldn't cope in the tournament?


There's something more wrong than just their technical ability.

Spot on. The players are decent enough but the way they've been thrown together by Pearce obviously hasn't worked.

Would it have been different if Pearce had the likes of Oxlade-Chamberlain, Sterling, Jones, Rodwell, Walker and even Wilshire? Of course it would. They're all better than the players that played but half of them are injured and some went away with the Senior side.

If they'd played would they then be burnt out by next summers World Cup? Would we yet again be castigated the clubs and the FA for putting too many demands on young players? Of course we would. I think the trip to Brazil and some extra rest will probably benefit the likes of Oxlade-Chamberlain and Phil Jones more than another tournament.

This, I think, is the real crux of the problem. We don't produce enough creative players because we end up buying in those players or, instead of getting them to flourish, we over coach them or make them into wingers who get marginalised.

Joe Cole had all the ability in the world, but instead of teams being built around him he was turned into a winger and never quite fulfilled his potential.

I still maintain that players reflect, to an extent, the society as well the football culture they belong to. As such, and perhaps it's climate dependant as well, we produce pretty steady, competant players who are quite risk adverse where as the Dutch produce players with a bit more maverick flair about them.

the Dutch are a pretty conservative bunch really

Having worked with and for plenty of Dutch in Amsterdam for 3 years I'd disagree. They're not all space cadets and red light distrint pimps no, but as a culture the place is less conservative than the UK and embraces individualism more than ours does.

I think their approach to football reflects that.

I'd also say that culturally they're very much in favour of the rights of individuals and the need to have a say and be heard - which may be why it's a rare tournament that goes by without arguments and factions in the Dutch camp. 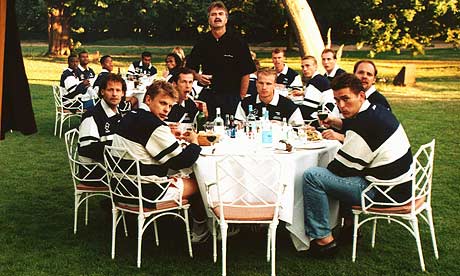 Didn't Danny Guthrie's wedding look something like that before the lobster thermidor went flying?

Hmm, nothing very special in that lot.

Barnes was extremely average for England most of the time. Rarely went past his full back. Extremely frustrating.
Platt was decent, if limited. Without his goals (important I agree!) he was nothing special, and not big on flair or skill.
Beardsley had a brief and decent partnership with Linekar but was pretty average most of the time for England.
Gazza was wonderful, briefly. Although I do think that the story is absolutely tragic.

There's some great 'England teams of the future' out there, but so few of the talented youngsters go on the make the most of their talent, and I think that's where we fail more as a nation. We don't get the best of our talent kicking on and really becoming the players they looked capable of being during their late teens (a few like Ferdinand, Gerrard etc apart).

That's not a bad side IMO, but our lack of flair and creative 'number 10s' is the bit that I think is the biggest worry.

There's no doubt in my mind that Pearce yet again got his team wrong for this tournament, and his chopping and changing just makes me think he has no idea of his best XI or how he wants them to play. If he doesn't know how were the players expected to perform as a team?

Quite a read. Of the three brightest English propects named at Reading, one's at Milwall, one's without a club and the third is Welsh.

To be fair to the Mail, His Royal Kanuness didn't discover he was Welsh until 2010. Before then he was as English as summer rain and below average temperatures - he even played for the England U18s in November 2007

A bit like Adie 'my dream is to play for England' Williams.

Pearce now playing what I'm sure Norway will see as a reserve team against Israel in our final game.

I'm not sure that's quite in the spirit of the competition to be honest, but at least now the likes of Clyne, McEachran and Wisdom get a chance to show why they probably should've been playing in the first place.

So they can lose too?

Still, at least our defeats have been to some of the real powerhouses of European football.

Users browsing this forum: No registered users and 0 guests