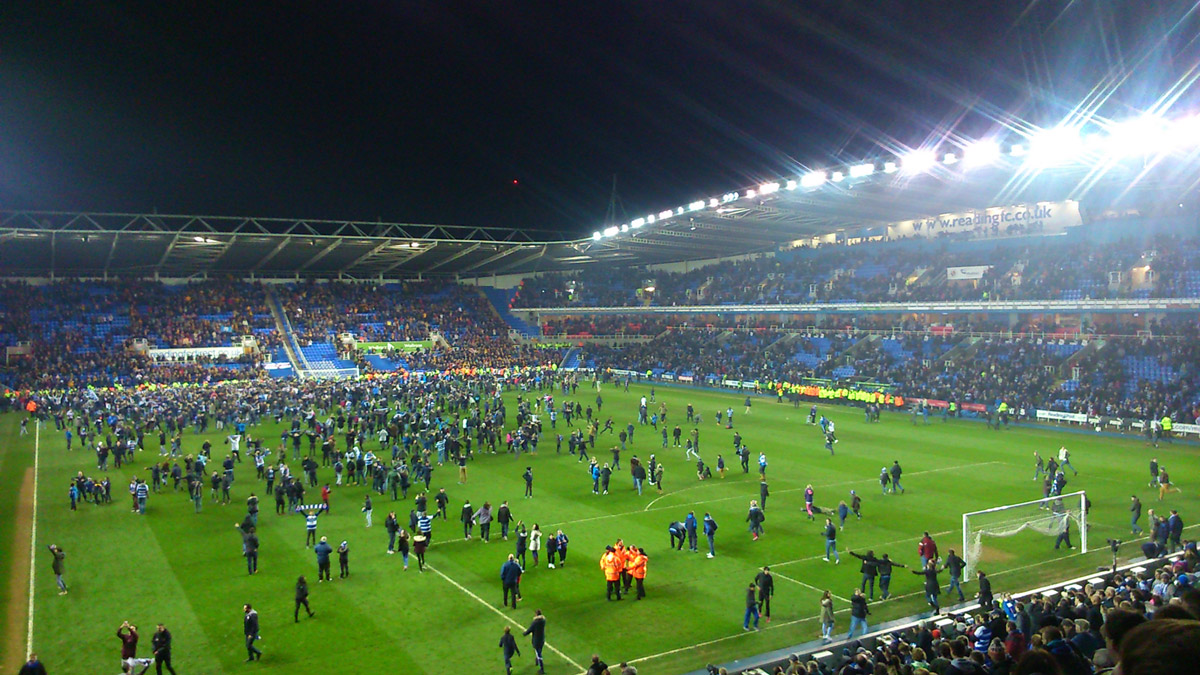 Reading cruised into the semi-final of the FA Cup for the first time since 1927 with a convincing three nil win over League One Bradford. City had reached this stage of the competition beating Chelsea and Sunderland but never looked a match for a Reading side playing to their full potential for the first time this season. In an astonishing opening ten minutes Robson-Kanu and McCleary had given the home side a two goal lead which they never looked like surrendering. The dismissal of Morais for a clumsy high lunge at Chalobah in the second half, and yet another blistering finish from Mackie on sixty-eight minutes put the result beyond doubt making the final twenty minutes a formality.

With the incentive of a Wembley appearance in the semi-final of the FA Cup against Arsenal provided a highly charged atmosphere inside a packed Madjeski Stadium, and the game could not have started better for the Royals. Having sensibly rested his starting eleven on Saturday Steve Clarke’s preparation paid off immediately when a glancing header by Robson-Kanu from a McCleary corner gave Reading the lead after only three minutes. Before City could clear their heads they found themselves two goals down as McCleary cut inside and unleashed a strike form the edge of the box which was deflected up and over City ‘keeper Williams.

Reading were completely in control of the game and Danny Williams almost made it three nil with a well struck effort from outside the box which his namesake managed to parry but could not hold. For a spell in the Reading seemed content to allow City to occupy their half and simply contain the visitors and clear the ball upfield for Mackie and Pogrebnyak to scrap for. City were unable to trouble Federici apart from a tame header by Hanson from a Stead cross, and the lead looked secure at half time.

There is always an element of doubt about the security of a two nil lead but on this occasion Reading fans need not have worried. Steve Parkinson tried to revive his flagging side with a double substitution on sixty minutes but three minutes later the referee somewhat surprisingly sent Morias off for a foul on Chalobah. It is unlikely this would have altered the course of the game but when Chalobah, who had an outstanding game in midfield, slipped a pass to Mackie on sixty-eight minutes, it really was game over. Mackie needs no encouragement to go for goal when presented with an opening. With typical directness he raced into the box and hammered the ball into the bottom left corner for the third and crucial goal. The last twenty minutes was merely passing practice for Reading as ten man City chased the ball around.

Bradford’s fans to their credit supported their team to the end. It was pity a few Reading fans let the club down with their antics on the pitch at the final whistle. It was almost beyond belief that the police and stewards formed a human barrier in front of the South Stand leaving only a couple of stewards to contain the fans in the South East corner where the potential for a section of the crowd to spark a pitch invasion was clear for all to see. It was disappointing for everyone that the team were unable to celebrate their achievement with the fans with a lap of the pitch. Nothing could however detract from a fine performance and the achievement of reaching the last four of the Cup for only the second time in the club’s history.
John Wells

Most nerves calmed by a great first goal. Second goal put us firmly in charge. A good spell from Bradford before half time, but they never really looked dangerous. Second half, all Reading. I seem to be the only person who thinks the ref got it right and it was a straight red - high, dangerous, studs showing - you're off , mate.

Chalobah will have great future ahead of him base don that performance. I thought he was good at Bradford - like a blood and guts game suited him. Tonight he was composed, played the simple accurate passes well. read the game and played with a real elegance and sophistication. Could be world class.

I love Jamie Mackie and have done since his debut. Hope he managed to make the birth of his latest kid. Great night. I may have sung along with Sweet Caroline at some stage, I think I was quite elated.

And for some reason, I now have some hope for the semis.
Armadillo Roadkill

Came straight home and started watching the game again on catch up. 2 goals inside 9 minutes took away any pressure there might have been. Chalobah was total quality tonight. He did so much hard work and made things look really simple. His positional sense was top class. Would love to keep him for next season. McCleary was also good tonight.

Good effort by the fans as well, but my favourite moment of the night goes to the Bradford fans with their version of Anarchy in the UK. Best football song / chant I can remember for a long time. Now to plan my route to Wembley.
3points

Just got home, lovely stuff. Quite happy with the club's attempts at drumming up some atmosphere. The last couple of games i've been to have been the best for atmosphere. I don't doubt it would have been like it regardless tonight, but for the first time ever i could hear constant, loud pre-match crowd noise coming from the stadium where the buses drop off.

Chalobah was masterful. Big future for him. HRK started brilliantly and dropped off a bit, McCleary did the opposite.

No threat from Bradford, and it was party time from the red card onward. Most comfortable performance since Bolton. 4 flips from the pitch invader whilst the tangos all looked at each other wondering who was going to give chase was great, children on pitch at the end was not. What happened with the goal music after the second goal?

Loved Federici taking his time to remove the stuff thrown at him when they still thought they had a shot at the beginning of the second half. Cool as you like.
Royal Ginger

Quotes From The Press

Bradford's fairytale run was brought to a halt as Reading sealed their first FA Cup semi-final appearance for 88 years. Goals in the first nine minutes from Hal Robson-Kanu and Garath McCleary set the Championship side on the way to a comfortable sixth-round replay win. Bradford's Filipe Morais earned a red card on 63 minutes and Jamie Mackie scored Reading's third shortly after with his fifth goal in six games. The Royals will face Cup holders Arsenal at Wembley on April 18 or 19. Reading took control straight from the first whistle, nine days after the sides battled out a 0-0 stalemate at Valley Parade.

Reading manager Steve Clarke told BBC Sport:
"It's a long time since we've been in the semi-finals as a club, but before that we've got some important games in the league. We need to get some points. It's another big pay-day for a club that's been struggling financially for a couple of years, and it's a nice thing for the new owners who've just come in.

"Everyone connected with the club thought we'd be challenging to return to the Premier league. That's not happened for whatever reason and we'll hopefully be more competitive next season. The players are delighted to do their job. I don't know if there'll be too many celebrations at this stage."
BBC Sport

We sneaked in under the radar, but I’ll be more excited about an FA Cup semi-final nearer the time,’ revealed a dead-pan Clarke. It was hardly champagne popping stuff, but that is Clarke’s nature after a coaching career that has also taken him to Newcastle, Chelsea and West Brom. He left the celebrations to the fans. By the end this place was raucous, with jubilant Reading supporters spilling on to the pitch at the final whistle.

A spine-tingling opening ten minutes had seen a goal from former Arsenal trainee Hal Robson-Kanu and another from winger Garath McCleary put Reading in command. Jamie Mackie’s strike in the 68th minute was reward for his endeavour, a fabulous finish after locking on to Nathaniel Chalobah’s delayed pass.

By then Bradford were down to ten men, chasing shadows after Filipe Morais was sent off for raking his studs down the body of Chalobah. Silly boy. The sharpest minds were in Reading’s team, with the soothing voice of captain Alex Pearce at the back containing and nullifying the threat of Jon Stead and James Hanson.

On a night like this you have to feel for Bradford’s fans, delayed in traffic for hours on the way to the Madejski Stadium. In the end Phil Parkinson’s team never got out of first gear.
Daily Mail